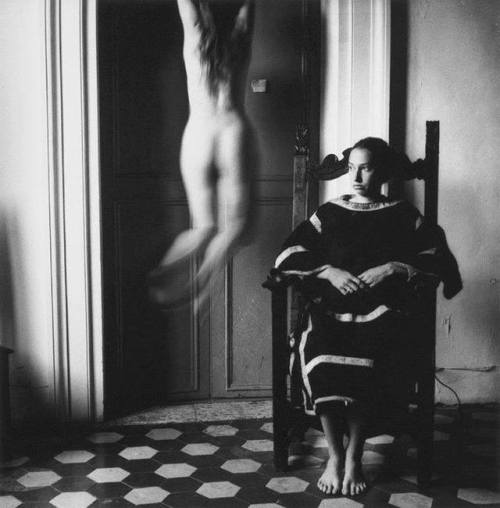 Francesca Woodman was an American photographer known for her black-and-white self-portraits. Despite her short career, which ended with her suicide at the age of 22, Woodman produced over 800 untitled prints during her life. Influenced by Surrealism and Conceptual Art, her work often featured recurring symbolic motifs such as birds, mirrors, and skulls. The artist’s exploration of sexuality and the body is often compared to both Hans Bellmer and Man Ray. “I feel like I a floating in plasma. I need a teacher or a lover,” she once wrote. “I need someone to risk being involved with me. I am so vain and I am so masochistic.” Born on April 3, 1958 in Boulder, CO to the artists George and Betty Woodman, she went on to attend the Rhode Island School of Design and traveled to Rome as part of its honors program in 1977. While in Rome, she made some of her most poetic and provocative works. Moving to New York in 1979 to stay with her parents, over the next two years, she was troubled by a failed relationship and felt her work was not gaining attention. The artist jumped to her death from a loft window on January 19, 1981 in New York, NY. Though she had few opportunities to show work during her life, Woodman has been the subject of numerous posthumous solo exhibitions, including “Francesca Woodman. On Being an Angel,” which opened in 2016 at the Moderna Museet in Stockholm.
via: https://buff.ly/32bfs1D
#francescawoodman #verocskakoschsartcorner #photography #blackandwhite https://ift.tt/2L6havM